NEW ZEALAND STRANGE OCCURRENCES SOCIETY
Search
Please note: copyright of these photographs belongs to the photographer. They have given permission for the photos to be used on this website only. The images may not be downloaded and reproduced elsewhere.

Ghost of small boy by freeway in Arizona? 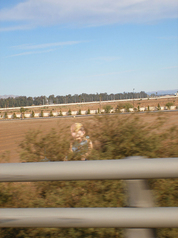 We were rather mystified by this photograph, guessing that it might have been a reflection of a magazine or something inside the car. Wrong!

In January, 2011, we posted the image on the forum at Paranexus.org, and in April 2012, the mystery was solved by Paranexus member Gregory Elbring. He was driving past in the same area and noticed the culprit!

It is actually a special, cut-out billboard, really a work of art, standing in the field. You can read more about these billboards here. Thanks guys!

Notably, when people see a photo like this, they immediately think - Fake! Photoshop! But if you were going to fake a ghost photo, why would you make it look like this? Surely you would pick something that looked more plausibly ghostly, and in a less mundane setting (probably not broad daylight). Most of the photos we receive have occurred accidentally, in the camera. This 'debunk' is certainly the most unusual we've had so far, and we never would have found the answer ourselves, without the help of Mr Elbring and the Paranexus forum. 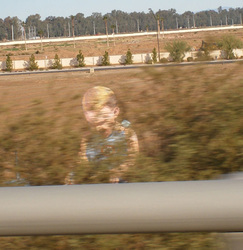 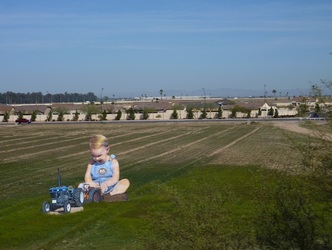 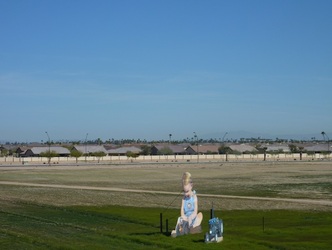 Photo of the photographer? 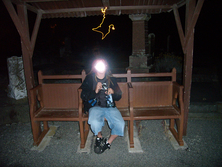 There were only two people present at this scene: the photographer and the seated person with the dreadlocks. We have some ideas about what is going on in this extraordinary photograph, but they don't line up with the photographer's account of the sequence of events.

So we don't really know for sure how there comes to be a face above the light flash in this photo. We have made an attempt to recreate the effect (see below) but it is not necessarily the answer. 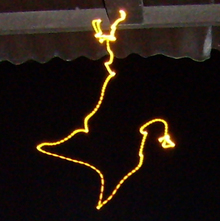 Detail of above photo
There is nothing supposedly paranormal about this area of the photo. It is a light source, probably a street lamp beyond the trees. The regular break pattern is caused by the light source switching on and off at 50 Hertz - NZ mains AC frequency.

The wiggly line itself is caused by the movement of the hand-held camera during the four-second automatic exposure. The camera was on Night Scene mode. 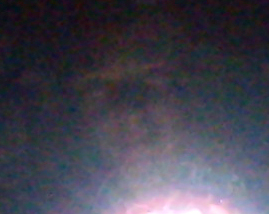 Detail of main photo - area above flash
Area of interest at original pixel dimensions, but lightened in tone, and with 80% digital sharpening (Photoshop, Unsharp mask) applied, in order to see the face more clearly.  We do not think this is a simulacrum (a random pattern of shapes interpreted as a human figure or face) but rather is an actual image of someone's face, quite possibly the photographer's. 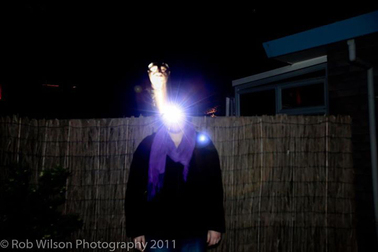 Rob's attempt at recreating a similar effect deliberately. Rob Wilson: "This was a 10 minute attempt at my theory as to how the photo was taken,and I think it fairly squarely shows how it can be recreated,and its a lot simpler than you would think. I will re-take this when I have a bit more time and take a bit more care, Kate Griffiths and I did this in 7 shots just getting the light
levels  similar and the face light central."