NEW ZEALAND STRANGE OCCURRENCES SOCIETY
Search
Please note: copyright of these photographs belongs to the photographer. They have given permission for the photos to be used on this website only. The images shown here are copyright and may not be downloaded and reproduced elsewhere.

Ghost in the kitchen? 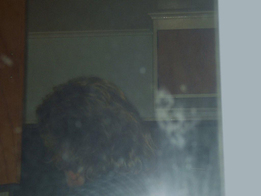 This photo was taken by the woman's daughter in a kitchen. No appliances were on at the time.

The swirly white patterns appear to be close to the camera lens, and are possibly lens flare, exacerbated by a smear of something on the camera lens. At first we thought it was steam, but we were informed that no appliances were turned on in the kitchen, so that explanation seems less likely. Also, it is not a reflection in glass.


However, the flare pattern on the lower centre-right of the photo suggests a flash reflection off something, perhaps a shiny cupboard handle or similar, or even a piece of jewellery on the hand of the photographer, which may then be highlighting a fingerprint or other mark on the camera lens, creating the head-shape.

Because the process of photography compresses three dimensions down to two, it is difficult to get a sense of depth in photos such as this. While the figure looks like it is (in part) standing behind the woman's shoulder, it is more likely smaller and much closer to the camera, on the surface of the camera lens or within it.

Once again, pareidolia (also called matrixing - the tendency we have to see human faces in random shapes) would seem to be the major factor here. But we would have to say this is one of the most uncanny photographs we have yet received. The above could be the explanation of it, but you may disagree.

As with many photographs that suggest paranormal activity, the photo should not be considered in isolation but rather as a single piece in a larger puzzle. Photos and other pieces of possible evidence should be looked at within the context of any investigation of the site and events. We are not writing this photograph off, in other words. 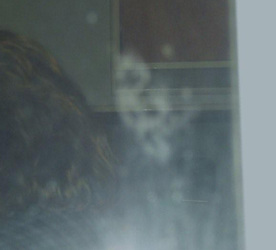 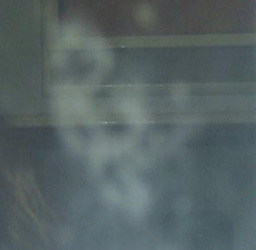 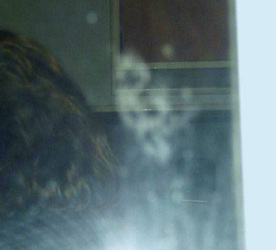 The face in the middle 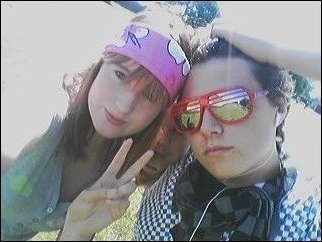 The original photo (right) is from a cellphone camera, so the resolution is low and the image is compressed (322x242 pixels, 22KB). It was taken by the girl, holding the camera out at arm's length, and includes her and her friend. There was no one else in the photograph and we have no cause to believe the photo was faked. Also, there was no reported feeling that anything was unusual at the time the photo was taken; the anomaly was discovered later.

It seems there is some object, be it the girl's hair combined with the ends of her headscarf, or or some other thing, which has the appearance of a human face - a third person who wasn't there. 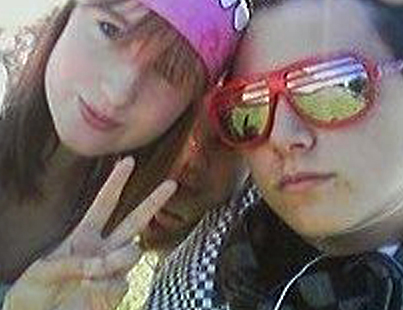 200% enlargement of original, showing artifacts from added pixels
This is probably an example of pareidolia, the tendency of the human brain to find order in random patterns, which can mean seeing faces in objects or hearing voices in random noise, for example. This is sometimes called matrixing.

The poor image quality of the cellphone camera exacerbates the effect described above. If the photo had been taken on a high
resolution, dedicated digital camera, we might not be discussing it.

Our guess is that it's the back of the headscarf that forms the main part of the face, with the ends of the girl's hair coming across at the bottom to form what looks like the mouth and small bearded chin. There is daylight between the girl's fingers and the point of the chin. Also, and more important, is the small amount of daylight showing between the girl and boy's foreheads. This is right where you would expect the top of the head of the anomalous presence to be, blocking out that daylight. 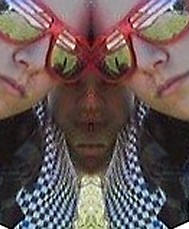 Experiment; cropped and flipped
Anyway, this is only our opinion. As an example of a simulacrum, it is extremely convincing, to the point where we can't altogether write it off. We would like to hear your thoughts on it.

This is one of the most unusual photographs we have received. With the owner's permission, we sent it to the Christchurch Press, where it was published in the article "Ghostly Photos Spark Debate".