How orbs are created in compact camera photos
The reason for this is that the flash illuminates dust particles that are drifting very close to it. These reflect light back into the camera lens, but they are too close to be in focus. A lens sees an out-of-focus point of light as a 'circle of confusion', and the more out of focus it is, the larger the circle. It is the circle-of-confusion image on the film or digital photo that appears as an orb. When the flash is close to the lens, the cone of light that it puts out intersects with the conical-shaped coverage of the lens. This overlapping area is where dust particles (or airborne water droplets, tiny insects etc) will become 'orbs'.

Why there are usually no orbs in DSLR photos
Lately I have been using an DSLR digital camera with a large flash that sits up about 20cm above the lens. In a room where a compact camera photographs orbs (dust), the SLR shows nothing. This is because the dust particles that are close to the flash are actually way above the lens, out of its coverage area.

You will also see orbs drifting across in video footage, but usually only when there is a light source (Infra Red or visible) situated close to the video camera lens. In the case of IR surveillance cameras, the IR LEDs surround the lens. These will show up-close dust particles as 'orbs'.

Contributing factors include the JPEG file compression employed by most compact cameras and the application of digital sharpening in the camera. These processes, as well as the optical quality of the lens, enhance colours and patterns "within" the orb, making them seem more than what they are: that is, specular flash reflections of the highlights of airborne motes.

A point of light from flash hitting dust appears as a circle at the image plane
This diagram shows how illuminated dust particles close to the lens render as larger circles at the image plane. Out of focus points appear as Circles Of Confusion (COC) where they hit the imaging sensor or film, and this image is the orb you see in the photo.

Final COC orb image
Dust particles move on air currents, which alter when you open a door and walk into a room or hallway. Human movement stirs up dust. Dust photographs as little bright circles of light on film or digital cameras, when illuminated by light sources close to the camera lens. This explains nearly every 'orb' photo you will ever see.

'Nearly' because we are open minded and regard each new instance of an orb as a separate case. There can be other explanations, such as lens flare, marsh gas, static electrical activity; or other point light sources such as a glowing cigarette, fireflies, glow worms, flashlight reflections etc.
If an orb in a photo is none of the above and is not from any other discernible natural or man-made source, then it may be supernatural, a spiritual energy of some kind. But you need to go through the entire process of elimination to reach that conclusion, which still should not be regarded as absolute. It may, however, add up with other evidence collected at a site to the possibility of paranormal activity. 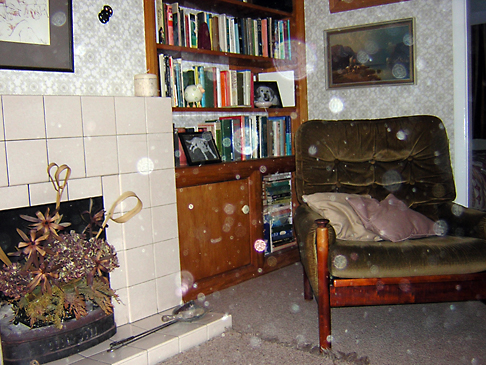 Making orbs by fluffing a cushion before shooting with flash (photo:J.Gilberd)
I have seen a lot of photos where there is a person 'pointing' at an orb, which seems to imply that the person could actually see or detect something in the vicinity of the photographed orb. Actually, because photography reduces the world down to the two dimensions, it is not possible to tell how far from the camera the orb is. There is almost never (in the case of dust orbs, at least) any spatial clues. In most cases, the person will be pointing at something in the middle or far distance and the dust orb will be mere centimetres from the camera! 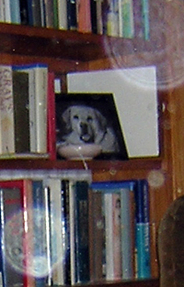 Detail from photo above
The book "How to Photograph the Paranormal" by Lenore Sweet, Ph.D. is full of such woolly thinking. By her own admission she is "mechanically inept", but photography is a subject that requires an understanding of physics. From the opening chapter where photos clearly showing the camera strap in front of the lens are paraded as photographic evidence of the departing soul of a pet dog, the book is unmitigated twaddle, especially the claims about orbs!
Actually, I said above that you don't actually see the orbs. Well, here's an experiment you can try safely at home: try stirring up some dust from a cushion or something then fire a camera flash in the cloud of dust. You will briefly see the dust near the flash lit up, and it will appear in the photo. Voila,  orbs!

We have had a lot of enquiries about orbs appearing in videos. Video cameras usually have LED illuminators sited close to the lens, and these can catch floating particles of dust, moisture droplets and small insects in a similar way to the flash of a still camera. The main difference is, of course, movement. We use infra-red DV cameras on our investigations, and these have multiple IR LEDs positioned in a circle with the lens at its centre. We often record floating orbs using this setup, usually caused by dust stirred up by passing humans, which appears as orbs up to several minutes later, or completely randomly. Sometimes the orbs have a flight path that makes them appear to follow people; but, as with still-photo orbs, they are really much closer to the camera than they seem. The apparent size of the orbs, and their flight paths, is an illusion caused by the compression of 3D visual space down to 2D. Usually there's nothing paranormal involved, but that doesn't mean we take things for granted and don't bother to check!
Note added by James Gilberd, April 2014