NEW ZEALAND STRANGE OCCURRENCES SOCIETY
Search
Please note: copyright of these photographs belongs to the photographer. They have given permission for the photos to be used on this website only. The images may not be downloaded and reproduced elsewhere.

Strange mists appearing in photographs have been linked with spirits and ghosts, and more recently, with ectoplasm! The concept of ectoplasm comes from the Victorian age, when Spiritualism was very popular (rife, if you like) and it was thought that spirits must materialise from something other than thin air. The word  Ectoplasm was coined from Greek by Charles Richet c.1894. More recently, the films Ghostbusters and Ghostbusters II re-popularised the stuff.

We think that the mists - or ectoplasm - appearing in these photos is most likely the photographer's breath, or cigarette smoke, illuminated by the camera flash. However, we can't be 100% sure. it's up to you to decide for yourself: ghostly materialisation or something more mundane? 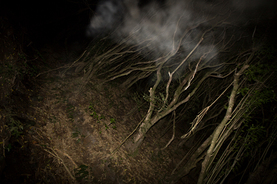 In the bush, Holloway Rd (photo: Rob Wilson)
We're not entirely sure what has caused this mist. No one was smoking, and it wasn't cold enough for breath to mist up - visible to the eye anyway - but the camera flash may still have caught Rob's breath, somehow.

We were exploring the bush the same night as investigating a house in Holloway Rd. Long-term dwellers in this historic Wellington street are known as 'gully-ites'. It is usual,
when a gully-ite dies, that their ashes are scattered in this area. 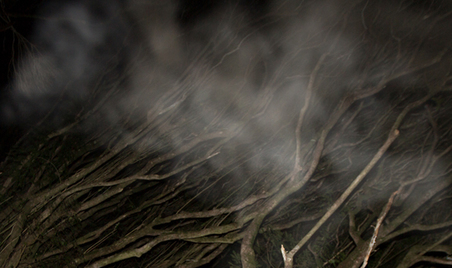 The track from the end of the road up through the bush follows the Waimapihi Stream - one of only two streams the runs under the Wellington CBD. The Waimapihi was thus important for Maori living on the Te Aro Flat, and in the Te Aro Pa, (around Dixon St-Taranaki St, central Wellington, but near the beach until
reclamation in the late  nineteenth-early twentieth  centuries).

We have also recently heard a story about a massacre that happened in the bush here in the early part of the 19th century, in the so called Musket Wars, where a number of Maori (around 20) were killed. This resulted in a tapu being placed upon the area. We have yet to corroborate this information. 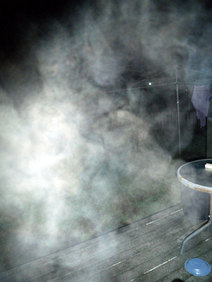 The sender of this curious photo asked if it could be "ectoplasm". Well, this word has come back into fashion for describing strange mists such as this that appear in photos. Often the mist cannot be seen except in the photo.
Ectoplasm was a term used in Victorian times, during the craze on mediumship, to describe the substance that spirits would materialise from. Some fraudulent mediums used to spew out things like lengths of cheesecloth, which, in the dim light, would appear as a kind of substantial vapour.

It is interesting the shapes that can be seen in this mist. It's not hard to see a shape like
a full human figure as well as a couple of faces in different areas. The photographer recognised
some past family pets, and indeed she took the photo in response to being nudged by the current
family dog. 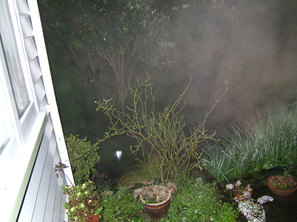 Our attempt to create a similar effect by exhaling
Once again, we think this is the effect of apophenia, (matrixing, or pareidolia) - the tendency of our brains to see order in random shapes.

We suspect the mist is caused by the photographer's breath coming round in front of the flash and reflecting back into the lens. Our photo on the right is not as spectacular as the one sent in but shows a similar effect.

If you want to avoid this effect in your photos in cool conditions, take care not to exhale before taking the shot. 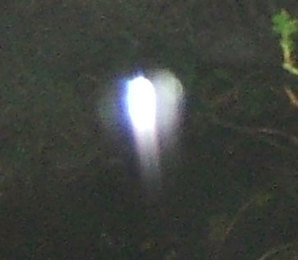 Close-up (100%) of light in our photo, above.
We think this is a moisture drop passing close to the camera, caught by the flash. The trail moving up probably to do with the way the flash works in relation to the shutter timing. If you want to try recreating this, go out and try taking some photos in the rain with flash. The effect varies between camera models, though.

Our photo was taken on a Fuji Finepix 810, standard auto mode with auto flash.